Lots of people will declare that competition will get you’ kilt in the streetz,’ but will seemingly never have any solid proof of that. Sure, defensive skills are different than comp skills, but if we had a Venn diagram of both skillsets, you’d see speed, accuracy, and cool under pressure listed. Competition shooting can be an amazing way to build your skills and confidence with a firearm. Getting involved in competitive shooting can be intimidating, and expensive, but a great place to start is Steel Challenge.

Well, Steel Challenge offers both a low financial and skills-based barrier of entry. All shooters need to compete is a gun, ammo, and preferably five magazines. You might get away with three, but absolutely no less. Skills wise there is no reloading on the clock, no weird positions, and only one stage requires a very short movement.

It’s super easy to get into. Getting your foot in the door and shooting your first match makes it much easier to get into USPSA, IPSC, 3-Gun, or whatever else you want to dive into. At Steel Challenge, you can learn how matches are conducted, learn the basic commands, safety rules, and generally just get used to the feeling of competition.

Since there isn’t much movement and no reloading, you might feel like you’ll grow past Steel Challenge quickly. That’s true and perfectly fine. Steel Challenge might not challenge you for long, and if that pushes you into the greater competition circuit, then that’s a good thing! Competition is great for skill-building and is a ton of fun.

If you’ve always wanted to compete, then here is the place to start.

The five stages utilize five targets consisting of 12-inch large circular steel targets, a 10-inch small circular target, and 18 x 24-inch rectangular targets. During your run, you have to hit each target one time. One target will be designated the Stop plate and needs to be shot last; all other targets can be shot in whatever order the shooter wishes. You’ll run most of the stages five times with your worst run dropped, and the rest averaged.

Only one stage, called Outer Limits, requires movement. It also has the longest shots. Outer Limits is only shot four times with three runs saved and averaged. Shooters have a maximum of 30 seconds for each round. Movement in Outer Limits is very simple and lateral—no crazy sprints or runs.

Since the eight stages are predetermined and never change, you can review and study them. Hell, get some cardboard and set them up to do dry fire runs if possible. It’s surprisingly easy and makes the competition very easy to get into.

Ooh, it’s your first time? Hot. Well, maybe, it’ll be a hot range eventually, but it will start cold. Every club does things a little differently. The best advice I can offer is to call or email and ask about the recommended procedure when a new shooter arrives.

Have your competition firearm unloaded, and I suggest keeping it stored in a bag or case, separated from your ammunition. When you arrive at the match, leave the guns and gear in the car, and seek out the match director and tell him or her it’s your first time shooting Steel Challenge. You’ll sign in and likely get a quick rundown.

Expect an area to be designated as a safe area for you to uncase and holster your unloaded sidearm. Do not uncase or unholster outside of this area. There will also be a safety brief where you’ll get the rundown on safety procedures. Regardless of what’s happening, feel free to ask questions.

You’ll be assigned a squad and, again, ask questions. People at Steel Challenge matches and in the shooting community tend to be quite friendly to new shooters. Once you are up to shoot and are unsure of what to do, just wait. You don’t want to unholster early or load early. Wait to be instructed to do so.

Don’t rush your shots. As a new shooter, you won’t score high, so just shoot straight. Focus on hitting the targets and exercising good marksmanship fundamentals. You’ll get faster in time. Hell, you’ll get faster in a single day.

You’ll need to talk to the match director or review the local website first. Some Steel Challenge matches might have specific rules. My local club doesn’t require you to draw for time and does handguns only. You may have to draw and shoot, and PCC divisions exist as well. Figure out what you’re shooting and bring that gun.

You won’t ever need more than 200 rounds of ammunition, so refer to the club to ensure you bring the right amount of ammo. Steel Challenge matches often allow rimfire, and that makes it cheap and easy to get into.

You’ll need ears and eyes, obviously. I suggest good electronic ear protection. This makes it easier to hear commands and operate safely—electronic hearing protection scores almost up there as a must-have. A set of Walker Razors is quite cheap.

I suggest five mags, so you don’t have to stop and load magazines during your match. Five is preferable, and you skate by with three magazines if you need to. Any less than that, and you’ll become the guy that’s holding up the match. Don’t be that guy.

Bring comfy clothes, closed-toed shoes, and a hat if it’s hot. You don’t want sweat in your eyes as you try to shoot. Other than that, come as you are. Pack a snack, and bring water, of course.

Need to find a Steel Challenge match? I just googled my city and the words Steel Challenge, but Practiscore is the hub for finding matches, seeing posted scores, and similar stuff. Steel Challenge is a gateway drug that can lead you into a funner competitive part of the shooting world. 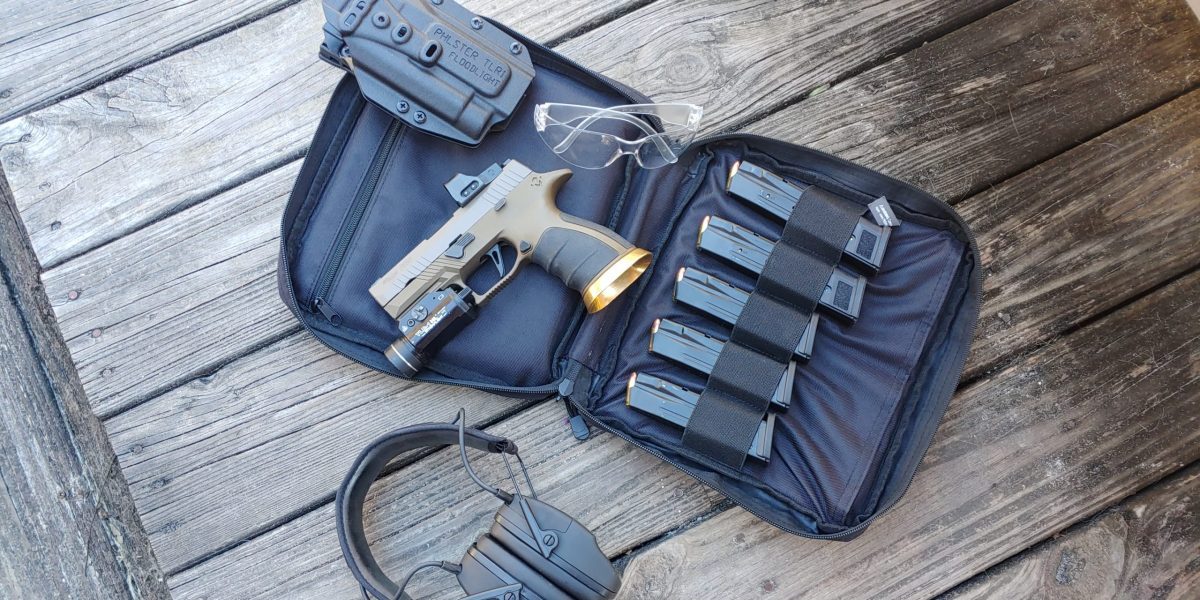