Down the Rabbit Hole of Precision Rifle Shooting

Accurate long-distance shooting is one of the most demanding activities in the world of shooting sports. Because of that, doing it well makes it among the most satisfying and fun. The Precision Rifle Series Championship in New Mexico drew two hundred of the top long-distance shooters in the country, including Steve from Gun Mag Warehouse. So, Jeremy, GMW’s resident “Noob,” went down to take a look, take some shots, and talk to some folks about how they got started in the sport.

I want to add that I have quoted more than I usually do in this article. I did so because of the genuine enthusiasm and friendliness of the two guys Jeremy interviews. I want that to come through, so I hope you’ll bear with me there. I highly recommend you take seven minutes to watch the video and see that genuineness for yourself. It speaks well of the sport.

First, though, a little about how the championship works. The two-day event is divided into twenty stages, with twenty squads of eight shooters each. The squads rotate through the stages, each slightly different and requiring multiple shots on targets of various ranges. Each stage requires at least one position change.

How Did These Folks Get Involved in the Sport?

Jeremy spoke first with Matt Partain, whose day job is in the oil and gas industry. When asked about the path to becoming a competition distance shooter, Matt replied that he and his fellow shooters are competitive people. Most people have some level of that in them. He first became interested when he a buddy started shooting at targets along the open space of an oil pipeline. He said that “There’s something about shooting stuff at a distance.”

Matt started looking online and found the Louisiana Precision Rifle Club. He started shooting in day matches at the club and now competes for them. Jeremy asked if he was former military, but he is not. He had to learn all the dope and adjustments himself and from others at LCRP.

Shooter Andrew Poindexter had a similar story. He’s been competing for two years, and this was his first national competition. He found the sport online in YouTube videos. One match was all it took for him to fall in love with the sport. “It’s just been deep down the rabbit hole ever since,” he said. Jeremy jokingly asked how long takes to make “crazy amounts of money” shooting in the series, to which Andrew laughingly replied, “Never, it’s for a good time. You got a hobby, you’re gonna spend your money on something. This is a good thing to do it.”

Matt mentioned the rabbit hole too when Jeremy asked him how much one of the competition rifles costs. For a full custom job, Matt replied, “every bit of about seven grand.” He said there are two ways a new shooter can go, depending on “how far you want to chase the rabbit down the hole.” First, you can buy a production rifle. He noted that GA Precision makes great rifles that “Lots of people just dominate with.” Others may want to do a full custom job and take it as far as they can afford.

Andrew and Jeremy note that the sport can be a “money sink,” so don’t run right out and buy a ten-thousand-dollar rifle and start loading your own special ammo until you’ve gone out and competed some. That way you can see what’s out there and what works for you. Andrew says of the other shooters in the sport, “Everybody’s nice. They let you use their stuff, try out their stuff. We’re all competing against each other but we’re having fun. There ain’t no better people out there.”

It’s the People Who Make It Great

Matt echoes the sentiment. “Some of the greatest people in the world shoot in this series. That’s what makes it so great. That’s what draws me back time and time again. We’re all like-minded and [share] a common goal and same interests so it works out great.”

Matt also proves what Andrew said about people sharing their gear. Jeremy asks about Matt’s different rifles (he has several) and how there are trade-offs with each one. Matt agrees and says that a heavier rifle absorbs more recoil, but then you have to carry it between all the stations, which can be draining to a certain degree, though he says the adrenaline caused by the competition helps with that.

Matt then launches into a brief dissertation on the differences between his setups, which Jeremy admits he doesn’t understand, but at the end, Matt says, “You’re more than welcome to shoot mine.” Jeremy, of course, takes him up on it and after a little coaching up, proceeds to hit targets at 300 and 640 meters, eliciting the expected enthusiastic responses from both men.

Jeremy notes that “There’s nothing holding you back” if you want to get involved in the sport. Matt agrees, saying, “You can start with anything. You gotta start somewhere. There’s always an excuse: ‘I don’t have this, and I don’t have that.’ There’s somebody out here that’s got what you need. I got extra rifles. Anybody that wants to go shoot, all you gotta do is call me, write me. You can shoot what I got. I’ll come RO (range officer) for you. You can shoot mine.” 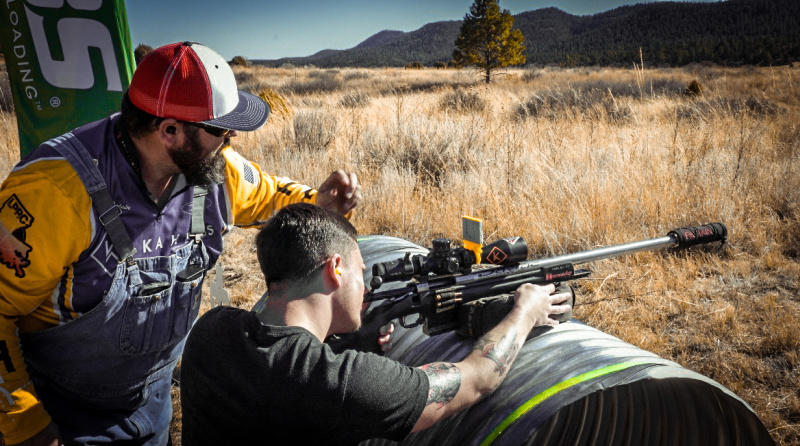 It looks like everyone had a great time, including Jeremy. Maybe especially Jeremy. I have to say, it has piqued my interest, probably more because of the people involved than anything else, though I have to admit that I find a good long-range rifle undeniably sexy. I may start shooting further downrange in the near future. Who knows, I might just fall down the hole. Try it. You might too.