The Batman — Saturday Night At the Movies

With the latest “Batman” movie Warner Brothers continue to prove they have no idea what they are doing. Luckily, we are getting some awesome hits with films like “Joker,” and now, “The Batman.” The film casts Robert Pattinson as Bruce Wayne and the film takes a darker, more grounded tone than any other “Batman” film. 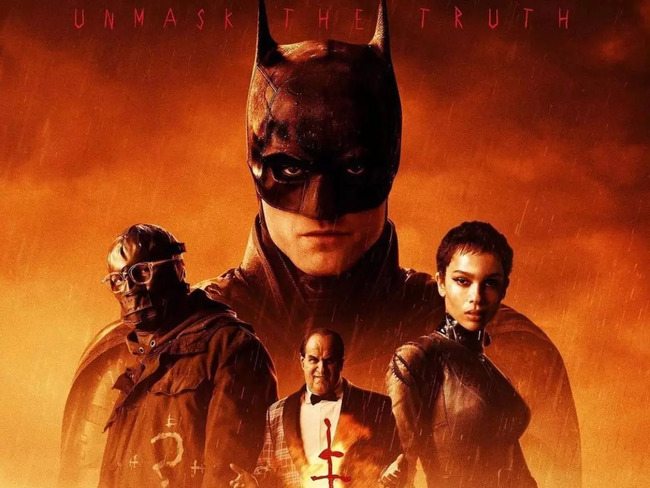 Fans are divided about the movie, and I can see why. It’s not what a lot of people might expect coming into a comic book film. It is extremely dark and in a lot of ways, we could replace the Batman character with any other detective and essentially have the same plot points. Superhero films seem obsessed with having plots that involve the end of the world but this film keeps things relatively small and focused on Gotham.

It’s a small film that casts a comic book character as more of a detective than a world-saving hero. There is no giant blue beam that blasts into the sky with some world-ending tension. The film isn’t action-packed. Rather, it’s action-pockmarked with the occasional brawl. Heck, the Riddler never even gets a brawl with Batman, they barely share any screen time. It’s slow and occasionally meandering, but I enjoyed it greatly.

They went super dark with it but only occasionally does it dwell on being melodramatic. What I do love is that it is almost 100% a “Batman” movie. Bruce Wayne gets very little screen time and there is a very noticeable difference between how Pattinson plays Bruce versus how he plays Batman.

Overall, the cast is fantastic. Paul Dano plays a terrifying Riddler, Colin Farrell is unrecognizable as the Penguin, and Zoe Kravitz plays an awesome Catwoman. Everyone owns their scenes, regardless of how big or small those scenes are.

Batman isn’t perfect either. It’s his second year of the Batman project and he fails on occasion. His plans don’t always work out, and he often finds himself backed into a corner. His gadgets are high-tech, but also kind of crappy and seemingly experimental. Pattinson plays the character as a dreary, socially stunted character with some very clear mental health issues.

I mean, he’s a guy who dresses up as a bat and punches people, the character’s always had some issues. This is the first movie to make those issues evident and portray them not so romantically.

The new grounded Batman uses some pretty cool, grounded gear. One noticeable part of his setup is the duty belt. It’s outfitted with basketweave style magazine pouches that he keeps various gadgets in. He also seems to have a handcuff pouch, a baton, and various other tough-to-identify accessories and gadgets.

Batman is also bulletproof. Well, mostly. It seems like his costume is mostly armor. The armor absorbs gunshots and they often seem to hurt him. One scene does have him unrealistically being blasted rearwards by a shotgun.

“The Batman” also features some neat, and grounded gadgets. My favorite is the heavily modified Batmobile in the form of a classic Dodge Charger.

“The Batman” and The Guns

Part of Batman’s modern schtick is that he doesn’t use guns, but he does use a gun. Kind of. Sort of. A grappling gun. In fact, he has two of them and they are up his sleeves. Well, sort of up his sleeve, more like part of his gauntlet.

In fact, we see him use the smaller gauntlet set quite a bit. They appear to be derringers of some sort that launch the grappling darts. The way they pop out from the gauntlet and into his hand reminds me of Rober De Niro’s rig in “Taxi Driver.” The film has some serious “Taxi Driver” vibes from Pattinson’s eternally brooding Batman. It’s almost homage-like.

He also has a gun-looking device in a thigh rig, although it never gets used. According to the action figure, it’s labeled a sticky bomb gun.

Batman might just use grappling guns, but the cops and robbers use real guns. Lt. James Gorden utilizes the Smith and Wesson M&P.

At one point Batman quips, “No guns.” To which Gordon replies, “That’s your thing,” and continues onward with the M&P. I’ll give the actor credit for using a realistic and modern hold that combines a handheld flashlight with his handgun.

Jim and the crew get into a gunfight where he takes precarious cover behind a door and engages some criminals. Later he carries a Mossberg 590 but doesn’t use it. We see some modern M4 variants with ACOGs, RMRs, and PEQ 15s.

Our Selina Kyle uses a Gen 4 Glock and of all the people in the film the actress, Zoe Kravitz seems to be quite competent in the way she holds her handgun. A good high grip, the use of two hands, and a good high hold show she knows a little about handguns at the least.

The bad guys seem to use a variety of weapons while the normal criminals use a mix of shotguns, machine pistols, and handguns. The Penguin seems to prefer a Micro Uzi which he rarely aims, but controls with seemingly amazing strength against the gun’s recoil.

One of my favorite scenes is Batman fighting a group of thugs in the dark armed with SMGs. The scene is completely dark, and the only illumination comes from the muzzle flash of the SMGs.

Later on, we see a more concentrated group of terrorists prefer rifles and shotguns. We see basic bolt actions, some shotguns, and a couple of M16A4 rifles in use.

I thoroughly enjoyed this film. It’s my favorite “Batman” film so far, but I understand why the fandom is so divided over it. “The Batman” doesn’t feel like a superhero movie, it feels like a dark detective film with a crazy dude in a costume who fights real good. I liked it, but I like detective movies too.

Has anyone else seen “The Batman” yet? If so, what did you think? Let us know below.