Israel’s BUL Armory is quickly gaining a reputation for quality firearms. The SAS II line of 1911s is no exception. Ben, Jon, and Genevieve from TheGunCollective [YouTube channel] recently took out the BUL Armory SAS II Tac 5 1911 and sharde their thoughts on this ultra-cool gun in the video linked below.

Let’s start with the BUL 1911’s specs from the BUL Armory website:

Ben is a big fan of the bull barrel, noting how it helps with accuracy. That accuracy is aided by the suppressor height iron sights and the RMR optic, for which the slide is already cut. The gun has a curved trigger shoe, which Ben notes is interchangeable, though we aren’t told what the other option is. Most likely flat.

The full-size grip is checkered front and back with a grip tape style texturing on the panels. Ben also likes the generously flared mag well and said it made loading the double-stack 19-round magazines easy. Those mags have aluminum baseplates. The slide is equipped with front and rear cocking serrations. He sums it up with, “This gun is fantastic!” Sweet, but how does it shoot? 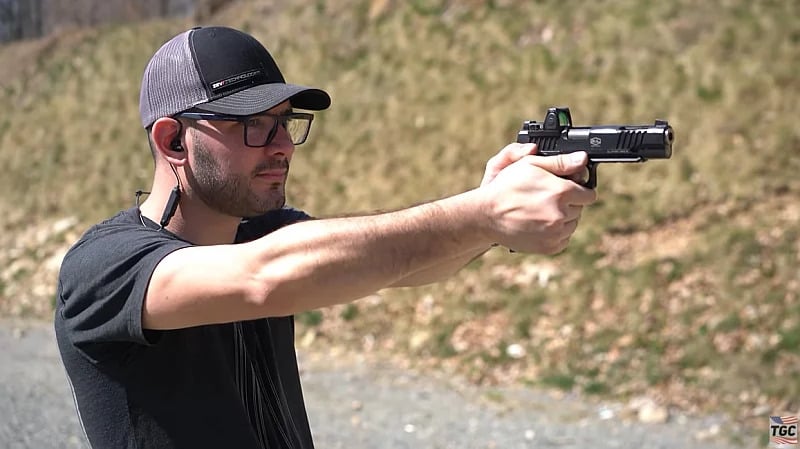 The Bul on the Range

Jon’s first reaction was a big smile as he exclaimed, “This is so good! The shooting experience on this is flat-out fantastic when I can actually do my part. Wow!” I think he likes it. Accuracy was a common theme as Ben says, “This gun is a lot of fun to shoot steel with. It’s incredibly accurate.” Genevieve followed up with “Killer accurate.” Ben: “That’s a bull barrel for you.”

So, it seems to shoot straight, which Ben confirms with, “I’m just an average shooter but I thought it was really easy to connect with targets at distance. This gun knows what you want to do, and it just does it.”

Is the Tac 5 Reliable?

“We ran mag after mag through it and it just ran like a sewing machine. Everyone at TGC loves this gun.” Ben says he would knock off half a point because “tactical” implies a threaded barrel, which the Tac 5 does not have. But he puts the half-point back because a suppressor “would taint its rock-solid reliability.”

Cost and Value of the SAS II Tac 5

Ben points out that the BUL Armory SAS II Tac 5 1911 is not a cheap gun. The MSRP at the time of writing is $1890. He does say, however, that a similar Staccato pistol costs about 500 bucks more. “Having shot both,” he says, “I really don’t see the Staccato as providing an entire Glock’s worth of value more than the BUL. This is a really nice gun and everyone that gets one is going to be extremely happy with it.”

What do you think? Are you up for an Israeli-built 9mm double stack 1911? Let us know in the comments. Happy shooting, y’all.
Watch the video here:

Slow Down to Speed Up: The Secret To Effective Pistol Presentations