The Terminal List has landed, and I couldn’t be more psyched. I enjoyed the novel by Jack Carr and typically, I’m a big fan of revenge plots. I’m a real sucker for the good guy doing bad things to bad people, so it’s the perfect show for me. The show premiered July 1st, with Amazon dumping all eight episodes, and I binged it with my beautiful wife over the long weekend. 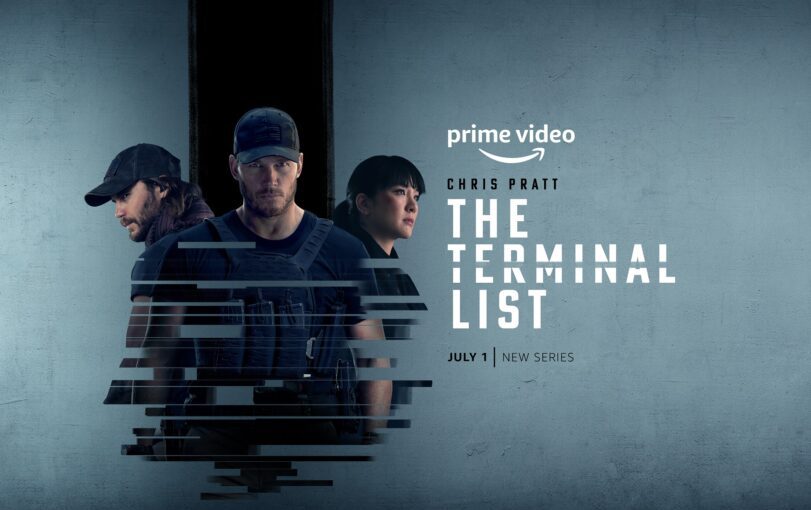 The book came out in 2018 and was a big hit, especially in the military and veteran community. At SHOT Show 2019, I met Jack Carr at the Blackhawk booth and got my copy of the book signed. He was super friendly and, at this point, still seemed amazed that he had so many fans. A book I like, written by an author who is a stand-up guy, combined with hunky Chris Pratt and a Beretta 1301—well, all of that might have imparted some bias into my review.

There will be light spoilers in the review, but I’ll try to limit them as much as possible.

The show has a fairly simple plot. After a series of tragic events, James Reece seeks justice while dealing with a mixture of his own personal demons and a potentially terminal ailment. The terminal list is his list of people who deserve to die. The book hits the general plot points, but there is a fairly large departure from the books in some ways.

Certain subplots and characters are dropped. It is more of a thriller and conspiracy flick than an action novel, though, there is plenty of action. A lot of events occur a bit differently in the show than they do in the movie, and some characters are also changed fairly substantially.

At the same time, there are scenes taken directly from the book. The one that stands out the most is Reece using his Echols Legend rifle to snipe the driver of a moving vehicle on a country road. The scene plays out exactly how I pictured it in my head when I read the novel.

One thing I appreciated is that show kept things nice and trim. It’s not overly long and convoluted. Streaming seems to be getting better about telling a concise story. The eight episodes hardly waste any time moving from plot point to plot point.

The cast does a great job, although I feel some are underused. Chriss Pratt and Taylor Kitsch shine, and so do Jai Courtney and Constance Wu. Sean Gunn is great but feels a little wasted in the show, as do Riley Keough and JD Pardo.

I do feel some of the changes from the novel to the show were not needed. Spoilers ahead for both the book and show. The death of Reece’s family isn’t nearly as violent in the show, and while we get ‘that scene,’ it’s not done to the guy who deserves it most. The show is fairly violent, but Reece is still a hero.

I felt the book took him to dark territory, and his friends even questioned how violent he was acting. In the book, he was a terrorist. That’s flirted with in the show but never becomes the main plot point.

The show also becomes rather humorless. There isn’t a joke or moment of levity throughout the dark, violent tale. Also, speaking of dark, why is the show edited to be so dark. Not the content, but the actual editing and filming of the show. Sometimes you can’t tell what is going on because it’s so damn dark.

The Terminal List is all about the action and violence, and I will say, holy crap do they do it right! The tactics and gun handling is spot on. The gear and gun selection are rock solid, and care was taken to ensure it’s the actual gear that high-end operators would choose.

The show includes the classics we expect SEAL teams to carry in terms of guns. In the first episode, the SEAL weapons of choice for the mission are The HK 416D fit with Vortex UH-1 holographic sights and suppressors. Later on, the SEALs in Reece’s platoon have commemorative Sig P226 Navy pistols that become a plot point in the show.

Later on, a mention of a SEAL’s preference for .45 ACP pops up, and we hear the 9mm vs. 45 ACP debate. A Kimber 1911 is the aforementioned SEAL’s choice of a 45 caliber pistol. Reece has a massive gun safe in the show chock-full of firearms that he takes when he decides to get revenge.

This includes the Echols rifle that’s mentioned a few times in the novel. Reece shows a preference for the Glock 19 as a sidearm.

The gun got a facelift from Taran Tactical, and apparently, a Terminal List package is available if you want to clone it. He carried it in a Black Point IWB holster.

Reece sticks with a AR 15. It’s hard to identify, but I did spot the familiar BCM logo eventually. He also has it equipped with an Aimpoint and magnifier, a Cloud Defensive OWL, and Magpul PMAG. Later on, we see FBI and SEALs using Knight’s rifles with Aimpoint T-2s

Ben (Taylor Kitsch) uses a 1301 that is drool-worthy and looks familiar. It looked identical to another Pratt and Amazon piece called The Tomorrow War. It turns out Xtreme Props supplied the guns for both the series and film, so it makes sense. That 1301 is adorned with Aridus Industries gear to make it one fine shotgun.

While the guns are aplenty, very modern, and well outfitted, they are only part of the equation. The actors who carry them do a fantastic job of operating them. They were very clearly trained in modern gun handling. The Terminal List stands out for showcasing some awesome gun handling.

The trained operators clear corners, work together, and maintain muzzle and discipline. We see reloads and controlled, aimed fire. All that jazz.

The basics are done right as you’d expect, but a few things are worth highlighting. Also, spoiler warning. Jack Carr gets a cameo as a hitman after Reece. He gets gunned down in his car before he can make a move. Reece moves around the car and dead checks him.

Once he confirms he’s dead, he does a reload from close retention and retains the partially empty magazine. It’s smooth and quick, and Pratt doesn’t even look at the gun. It’s so well-rehearsed it’s automatic.

In the 4th episode, Ben is running his shotgun, and we constantly see him reloading the gun from his carrier. If he’s not shooting, he’s reloading. Taylor Kitsch can run a damn shotgun. It’s impressive. Near the end of this action sequence, he and Reece confront two armed men who both took hostages. He does a slug select drill, and he and Reece take coordinated headshots.

Later on, we see Ben cover Reece with a sniper rifle as he moves through a much bigger force. Reece uses smoke paired with thermals to give him an advantage over the larger threat, and it’s a smart tactic.

I enjoyed The Terminal List. I’ve seen a lot of negative reviews that make it seem like it takes a political stance and is somehow conservative in nature. However, I find that tough to qualify outside of being pro-2A since Reece is a gun owner. It doesn’t necessarily put the military in a good light, targets the military-industrial complex, and doesn’t seem to openly or covertly take any political stances.

It’s a fun show. The series is short with only eight episodes, and I think it’s well worth the watch. I hope to see another season, and I really need to pick up Carr’s fifth book. What do you think of The Terminal List? Let us know below!