The Way of the Gun: Not a Brains Operation

I discovered it on HBO, Cinemax, or one of those movie channels when I was a teenager. The free weekends of those services always introduced me to new, violent action movies I’d never see anywhere else. After watching it once, I was hooked. It became one of my favorite movies and I’ve watched it over and over and over. 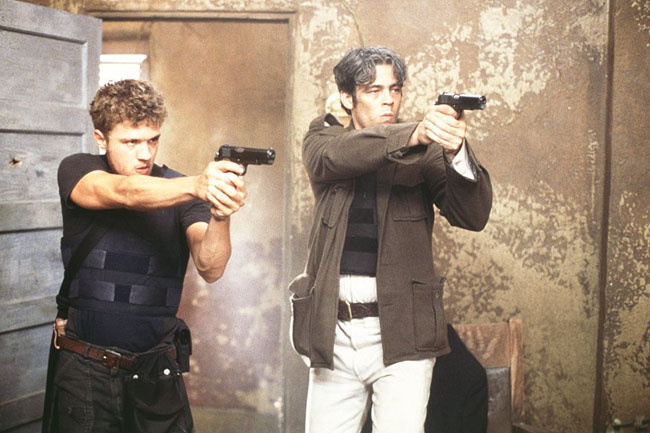 After seeing it for the 108th time, I figured I could finally write about it. You can purchase it for 99 cents on Amazon right meow.

The Way of the Gun is a neo-western flick in a time before neo-westerns were popular. If you wanted to watch a neo-western nowadays, you could watch Yellowstone on TV, Wind River on Netflix, or Hell or High Water somewhere. Back in 2000, the genre might have existed, but this was the first one I ever saw.

It kicks off with a slow monologue introducing our characters and their paths. This is as much backstory as we get, and honestly, it’s as much as we need. The main protagonists of our film are Parker and Longbaugh, and if you’re western savvy, you’ll recognize those as the real names of Butch Cassidy and the Sundance Kid.

Our two outlaws exist on the fringes of society and do what it takes to get by. At a sperm clinic, they get a lead on a potential money-making venture. The plot revolves around the kidnapping and ransom of a pregnant woman played by Juliette Lewis, who is acting as a surrogate for a mafia boss.

From there things get interesting, and along the way, we get some rock-solid action, solid tactics, and fun guns. The film feels a bit like a generic-brand Michael Mann flick. It’s stylish, and the gunplay is great, but it doesn’t have that solid Mann feel to it. It’s Michael Mann but indie style.

Though I love The Way of the Gun, I don’t like the characters. Well, I mean, I like them in the film as characters, but I wouldn’t like them if I ever had to deal with them in real life. The vast majority of these characters are straight-up criminals. The most sympathetic character, Robin, is a good person in a bad situation.

James Caan plays an experienced bagman named Joe, who has this charm that’s tough to beat. Seriously, James Caan is charming in everything, and he charms his way through the film. He’s an antagonist and, at first, seems like a man doing a job, but then it seems he might have a closer relationship to the situation than we know.

Our two heroes are unashamed criminals, not above murder, torture, and supreme violence. They aren’t sadists, but they are perfectly willing to kill to get what they want. Still, you’ll find yourself mostly cheering for them. Or, well, they are the characters you will feel something similar to cheering for throughout the film.

The Way of the Gun exhibits a subtlety I appreciate. It doesn’t treat you like a child and explain every twist or slap you in the face with exposition around every corner. Some things the viewer needs to figure out. Other times it’s left open-ended for you to figure out.

A movie called The Way of The Gun better have some tight gunplay. And, Oh, it does. The film has all the things that gun nerds like me look for. The guns are reloaded, especially whenever there is a lull in combat. Both the characters receive wounds in their arms and are forced to reload one-handed, and both do it rather quickly. Parker’s shotgun reloads are a nice touch.

The gunplay is always loud and vicious and each gunshot is an exclamation point in the film. It’s loud, and I love it. The action is fairly fast, and it looks great. No shaky cuts or any craziness to it. You see the action.

Beyond that, the characters’ tactics are often solid, especially our two protagonists. There is a certain panache to their tactics and gear. The bad guys carry concealed and use Galco IWB rigs to do so. Their long guns have slings, although they are those terrible late 90s three-point slings.

The tactics are solid in ways you might miss. When the two ‘snipe,’ they use a shooter/spotter setup. They lay down cover fire and even bound to cover while one covers the threat. The slowest car chase ever mixes in some fantastic use of cover and smart tactics to evade a pair of Wiley bodyguards.

The Guns of The Way of the Gun

The guns are very much of the era. The two main characters use Colt 1911s. They both use the same gun, which makes a ton of sense. They can share ammo and magazines, and logistics are simplified. Even in 2000, there were plenty of better options than the 1911, but they made it work.

The high-cost bodyguards utilize the very modern-for-the-time HK USP. We see a mix of shotguns in use by everybody, from the protagonists to the bodyguard and the team of bagmen. Speaking of the bagmen, they love their revolvers.

Sure old dudes love revolvers. That’s a trope that was super present in the 2000s. The fact they were all snub nose revolvers is an odd choice. Great for concealment but terrible when you know you’re going to a gunfight. Yet, those are the guns the bagmen brought to the fight.

In a few scenes, the protagonists use a Galil in 7.62 NATO. That’s a sweet gun, and I loved seeing it. However, it created a problem for the movie to solve. Our Galil-wielding protagonist would make short work of the bagmen, so the movie’s creators had to fix it. What they did was make Benicio del Toro empty the gun and his spare mag in about five seconds.

It’s a bit of a continuity failure in context with their other preparations and tactics, but nothing unforgivable.

I don’t think this is a Brains kind of operation.

The Way of The Gun takes the cake as one of the best gun movies ever. It’s fun, it’s action-packed, the gunplay is tight, the tactics are solid, and the film still has a story to tell. It’s not an action movie that treats you like an idiot, and I appreciate that. What does the peanut gallery have to say?

Do you enjoy this flick?